The source lakes and peatlands which we discovered during our Megatransect expeditions, revolutionised our understanding of the keystone importance of the forested watersheds of South-Eastern Angola. The area had received almost no previous scientific attention, and was thus misunderstood and deprioritized in conservation investments and interventions.

We found a post-war wilderness frozen in time for over four decades by armed conflict in Angola, and the lingering threat of landmines. But as landmines are decommissioned and access is restored to the region, an influx of guns and motorbikes into the area is facilitating the increase of illegal bushmeat hunting. Overexploitation of these natural resources will not only strip this area of its amazing wildlife but will also put the future of the communities living in the watershed at risk. 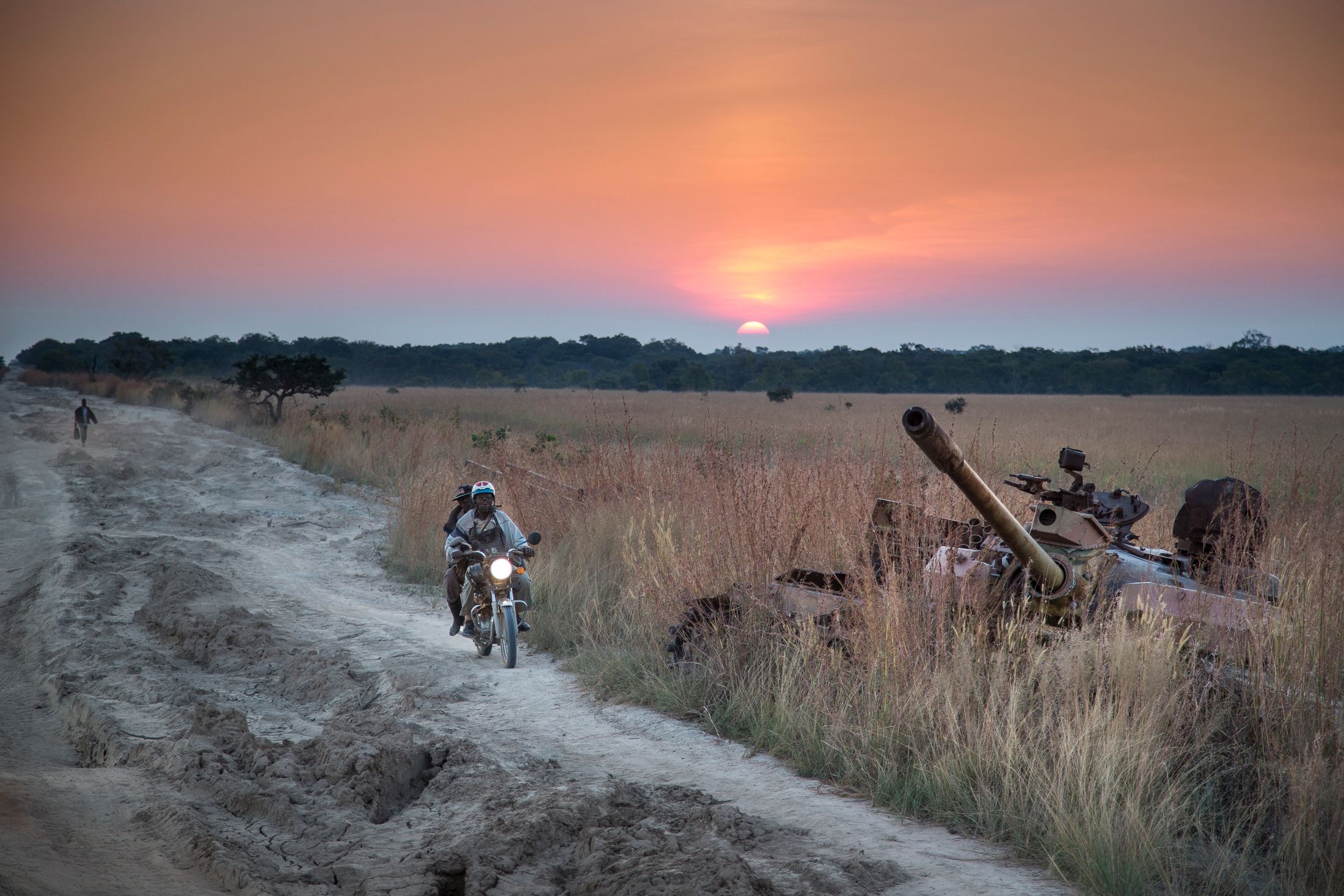 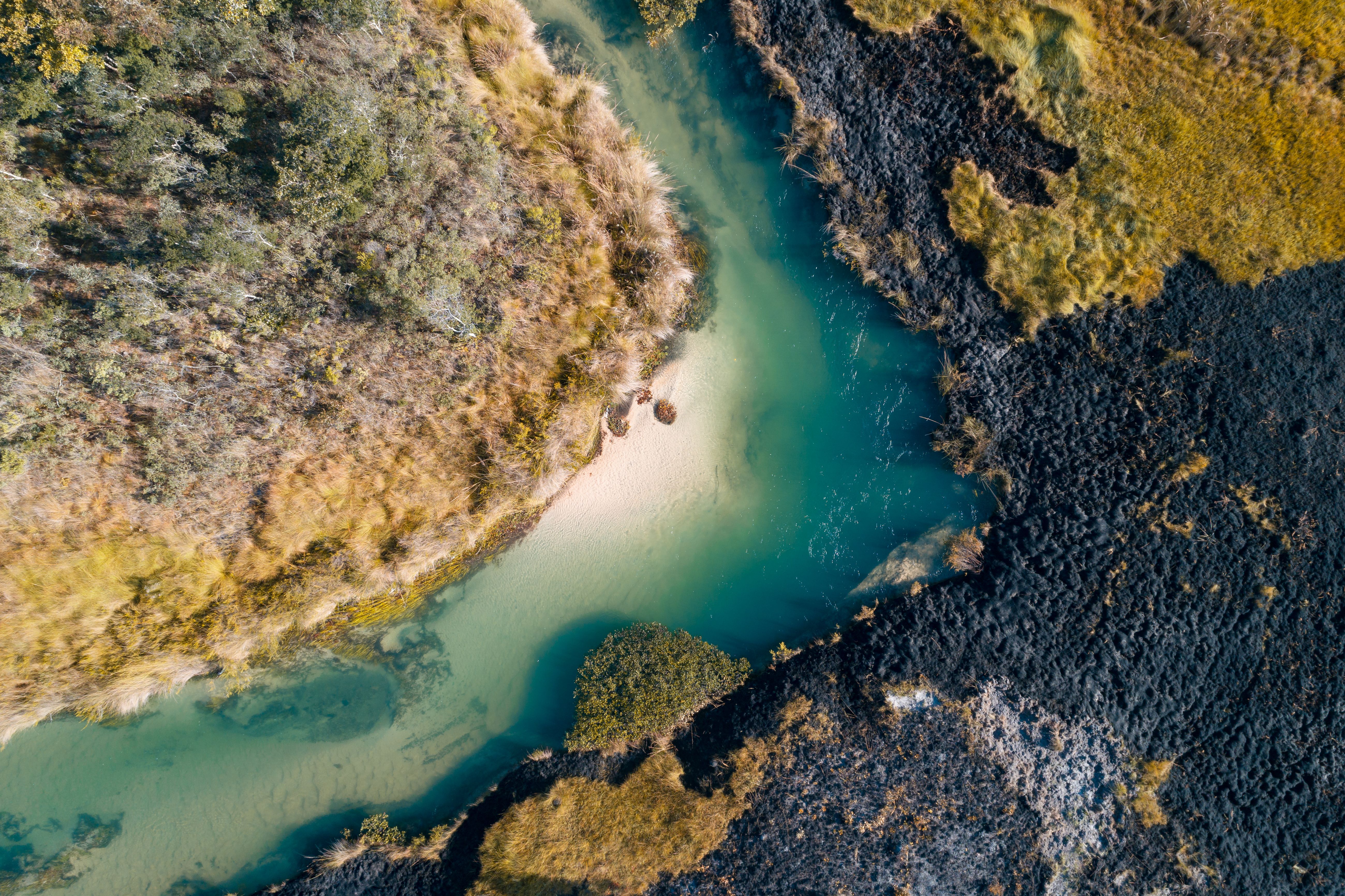 The National Geographic Okavango Wilderness Project team has observed threats such as slash and burn farming methods, overfishing and logging growing over the past several years. If they continue unmitigated over the long term, they will result in irreversible environmental breakdown and the consequential loss of crucial ecosystem benefits for Angola and the world.

The 2020s are going to be the most important decade in history for Africa’s river basins as their unprotected sources open up for development and exploitation. The NGOWP is uniquely placed to do this important work having secured the necessary finance, partners and government support.

The National Geographic Okavango Wilderness Project team are the only group, public or private, that enter the Lisima Landscape to work directly with local communities to find sustainable, long-term solutions for the protection of the vast forests, peatlands, source lakes, rivers and floodplains.

Over 11 expeditions have been completed across major rivers covering 6,000 miles of research transects using dug-out canoes, bicycles, motorcycles and on foot. Local communities have also been involved with the project in order that we may understand their functioning with the ecosystem and the challenges and opportunities living in the remote landscape poses.

The research team has almost 60 scientific publications and species descriptions published, in press, in review or in preparation. This research represents the first publications on this part of Angola for decades, highlighting the keystone importance of this Water Tower in Moxico Province.

The relative isolation of the area around the headwaters during the previous decades of war in Angola has served to preserve an array of rare and endemic species. To date, exploration of the area surrounding the source lakes and headwaters of the water tower by NGOWP has revealed at least 29 species new to science and 46 species new to Angola, along with countless species range extensions (NGOWP 2018). With the study and lab-based identification still underway, it is likely that these figures will increase, indicating an area important for species endemism. 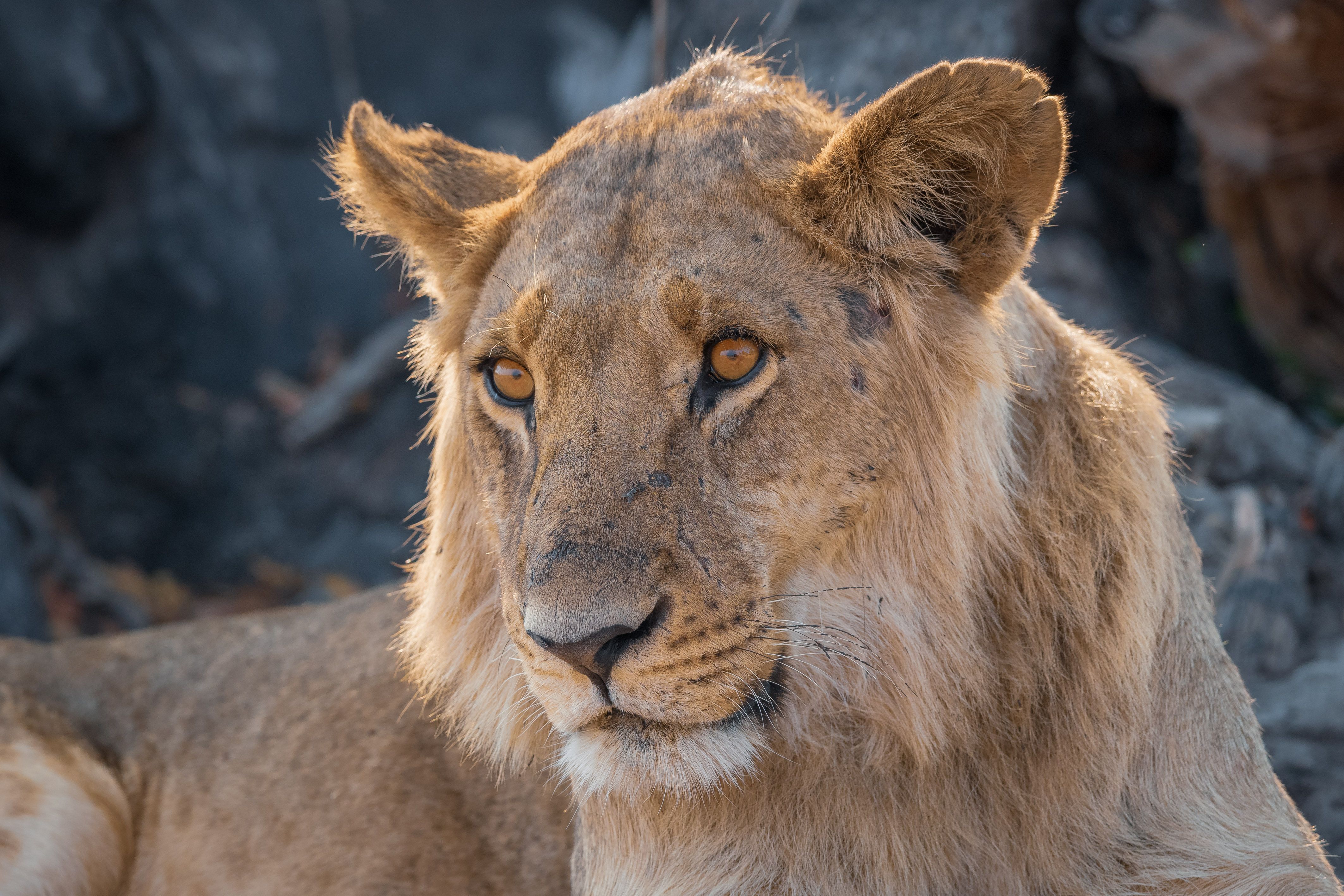 The Water Tower of Southern Africa

An average of 2.5 trillion gallons of water flow through the Okavango Delta system every year, providing water to a million people and abundant wildlife. 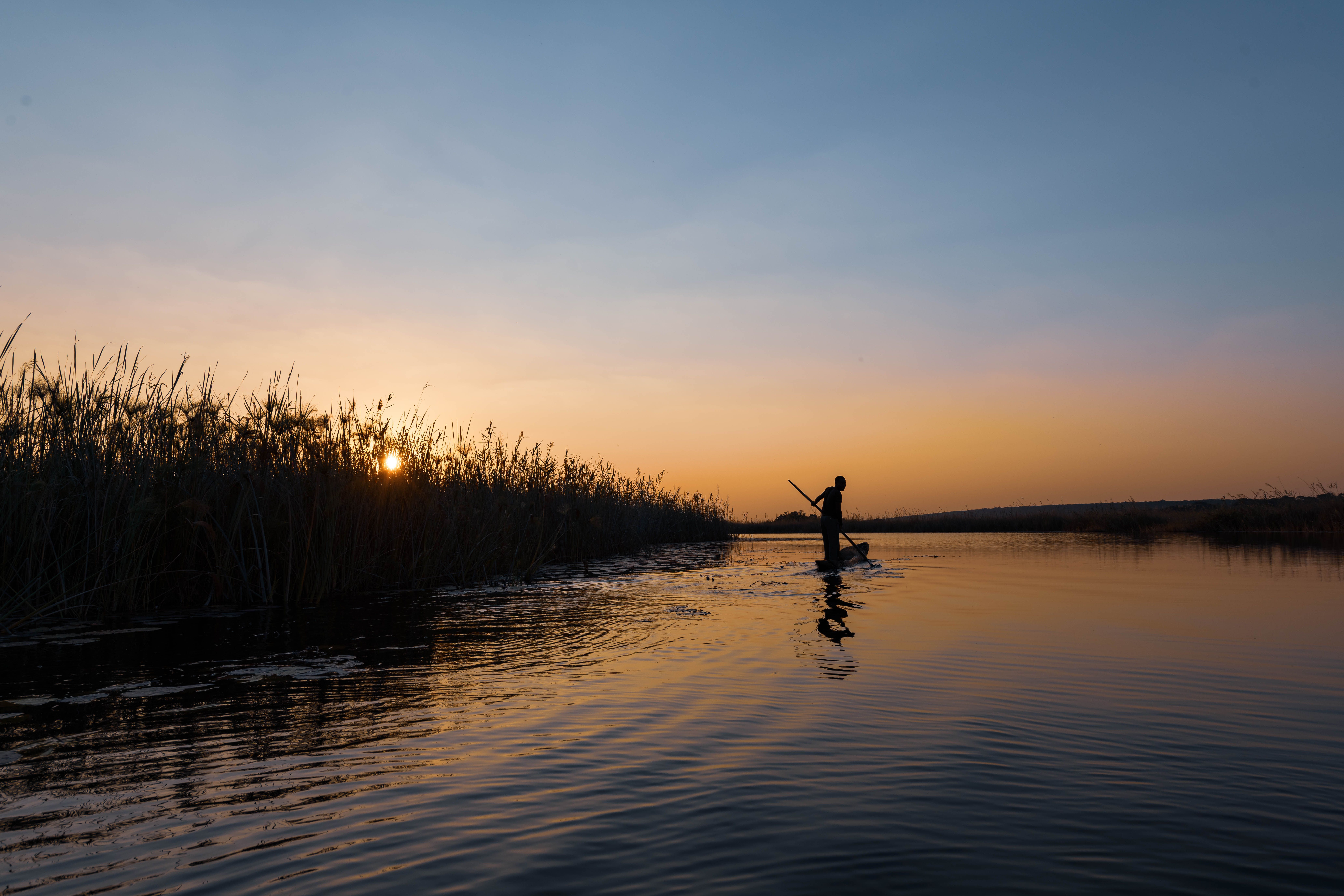 As access to this near-pristine wilderness increases and pressure mounts to develop in the area, securing legal protection is urgently needed to preserve the biodiversity treasures and freshwater resources in the highlands of Angola and of the entire watershed for future generations.

The National Geographic Okavango Wilderness Project has identified a 120,000 square kilometer region—where the headwaters of the Okavango, Cuando, Zambezi, and Kwanza Rivers originate—as the key to the long-term conservation of the Okavango-Zambezi Water Tower. The proposed protected area is being coined Lisima Lya Mwono, meaning the “source of life,” in the local Luchaze dialect. Once created, it will connect to a system of protected areas spanning Namibia, Botswana, Zambia, Zimbabwe, and Angola—otherwise known as the Kavango-Zambezi Transfrontier Conservation Area.

The health of this crucially important source of water for wildlife and people is dependent on a system of source lakes and rivers that originate in Angola — waters that currently have no official protections. 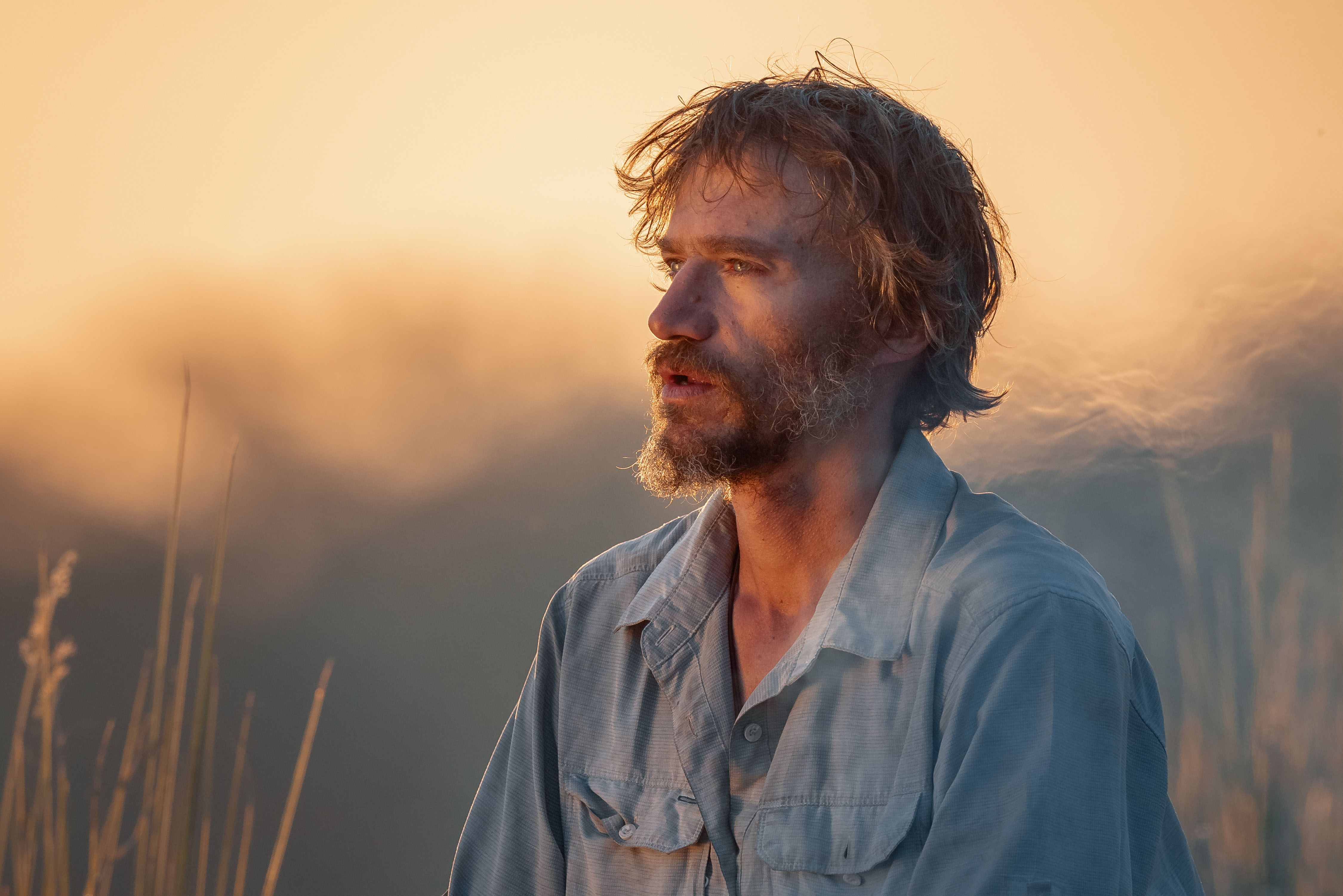 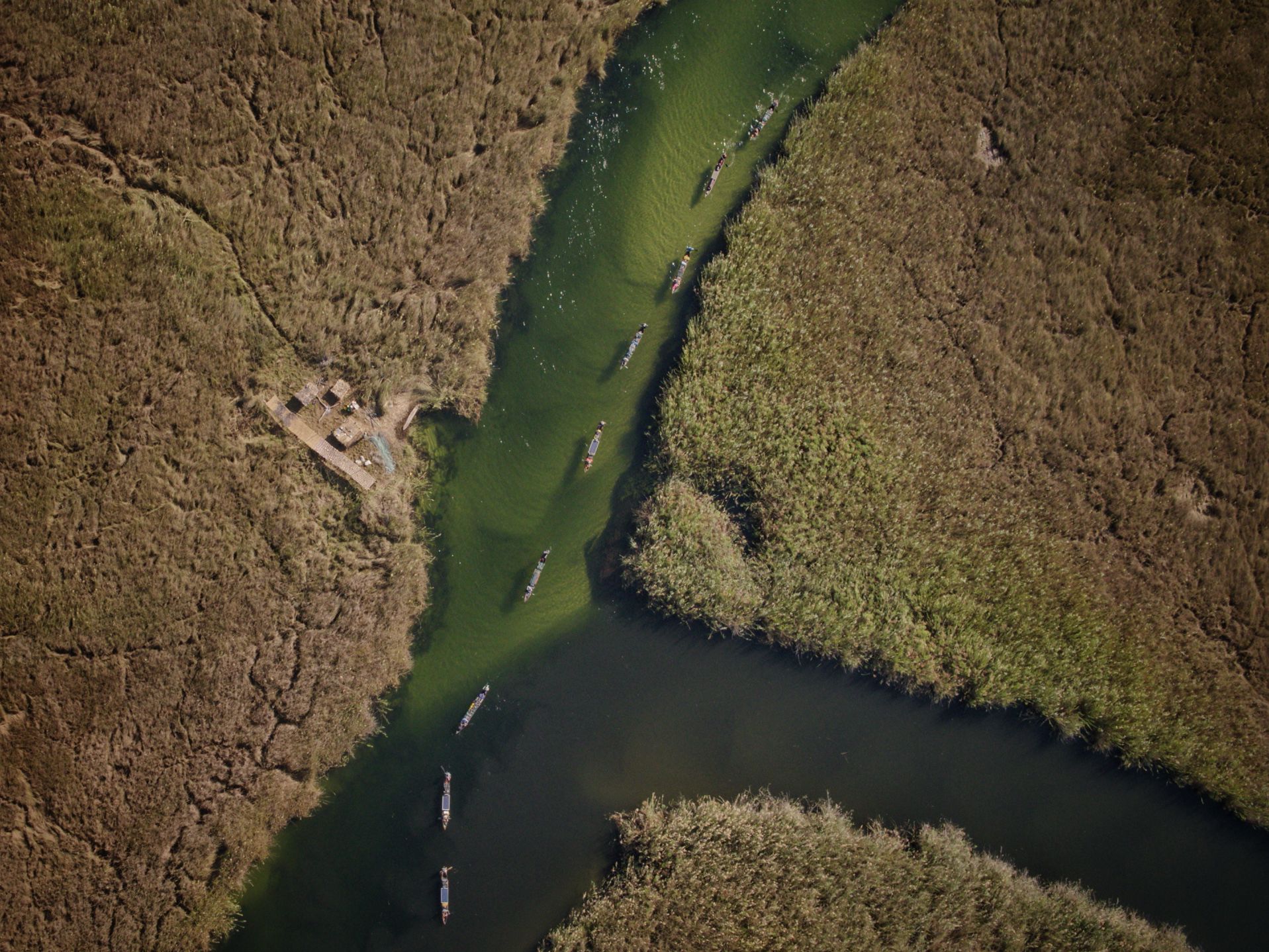 This phase of the Okavango Wilderness Project’s work will support the Angolan government in protecting these remote watersheds that have significant transboundary conservation value. The Angolan government has made forming public-private partnerships with local and regional NGOs a priority, using these partnerships to bridge gaps in local capacity and access finances that will help catalyze the diversification of the economy.

In 2018, the National Geographic Society signed a Protocol of Cooperation with Angola’s Ministries of Tourism and Environment. This agreement identifies the Society as the “convening partner” of the Okavango-Zambezi Watershed Partnership, a conservation consortium that aims to support the government of Angola in developing and implementing a National Biodiversity Strategy and Action Plan to protect the Okavango-Zambezi Water Tower.

An average of 2.5 trillion gallons of water flow through the Okavango Delta system every year, providing water to a million people and abundant wildlife.

An average of 2.5 trillion gallons of water flow through the Okavango Delta system every year, providing water to a million people and abundant wildlife. . Over 95 percent of the water that flows into the Okavango Delta each year originates from rainfall over the Angola Plateau. The area’s abundance of rivers and vast miombo woodlands create an ecosystem characterized by seepages, streams, and oxbow lakes, and ridgelines spread across what has been termed Lisima Lya Mwono in the local vernacular, meaning the “source of life.” 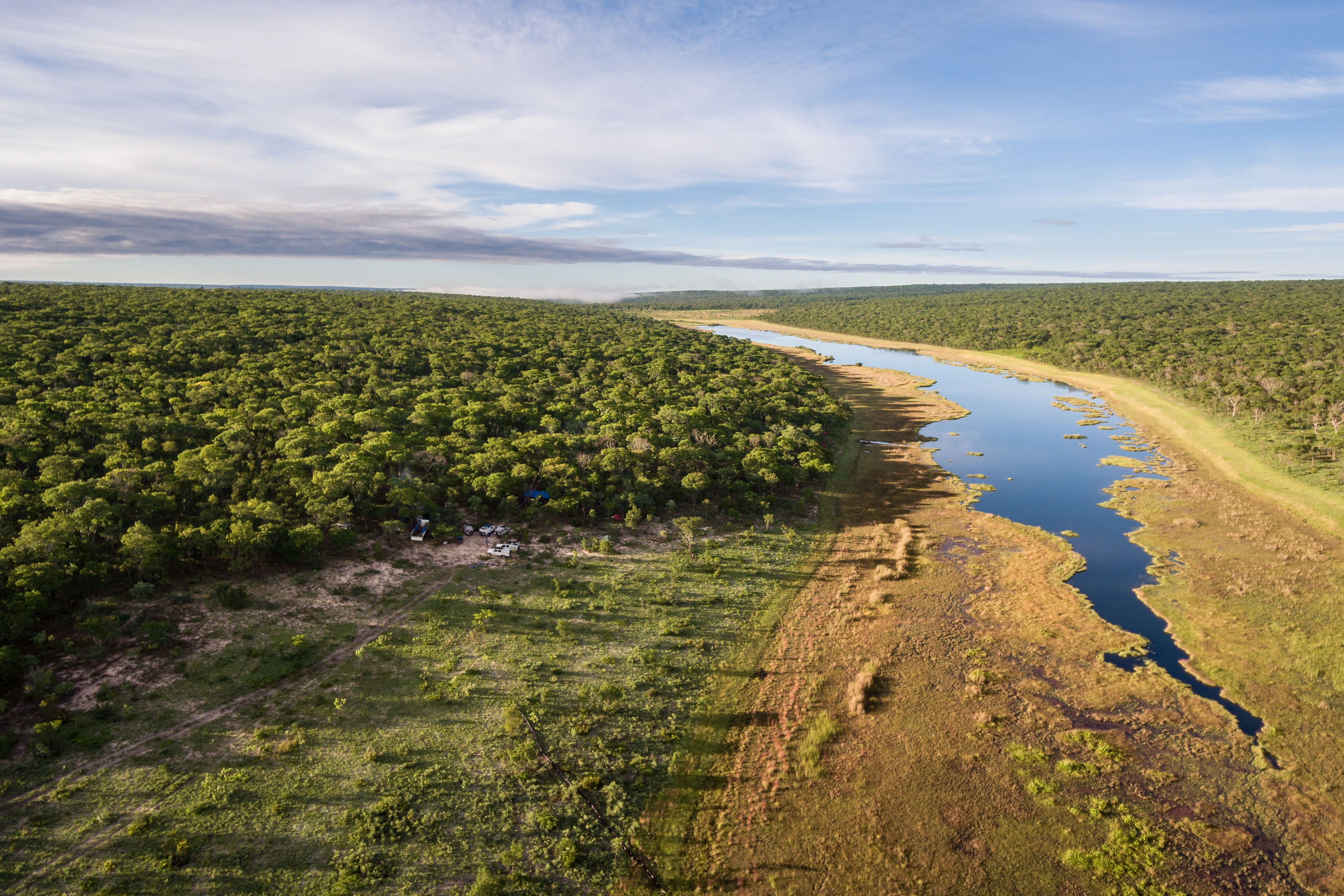 The annual rainy season drops three times as much rain in the highlands as in the delta. 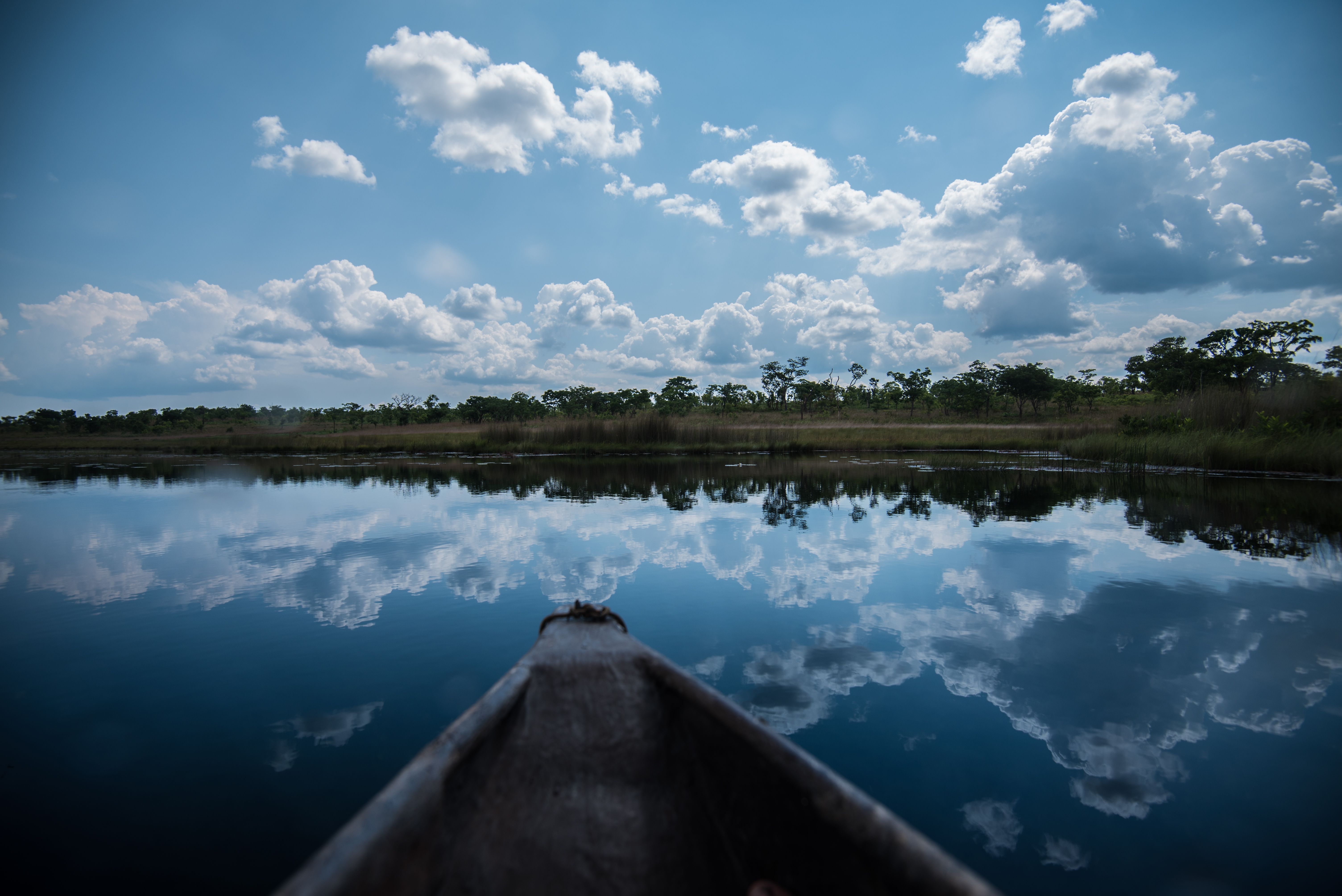 The annual rainy season drops three times as much rain in the highlands as in the delta. It falls in the moist, forested highlands of Angola’s rainy center where hundreds of rivers, like the source rivers of the Cuito, Cuanavale, Cuiva, Cuando, and Lungue-Bungo, flow out of marshy lakes.

The seasonal rains make their way to the Okavango Delta by either traveling the steep, rocky, and cascading Cubango River in the west, or down the meandering Cuito River to the east, where springs feed source lakes, which then percolate through grassy floodplains, peat deposits, and underlying sand and seep into tributaries.

These two sister rivers, which supply nearly all the water that flows into the Okavango Delta, converge at the southern Angolan border to form the Okavango River. This river flows across a narrow strip of Namibia into Botswana where it radiates out over the Okavango Delta. After building up for weeks in the delta, water eventually bursts forth from its southern reaches, forming the Boteti River, which flows out to the Makgadikgadi Pans and into Lake Xau.

These seasonal salt pans have by that time already turned to lakes, fed by floodwaters of the Zambezi to the northeast.

The Cuito and Cubango Rivers are essential to the future of the delta, but they face different pressures. The Cubango is stressed from existing development and poor management. But as these mines are decommissioned, the river is increasingly threatened by unregulated development and the erosion and ecological ravages of rampant human-set fires. This is the biggest conservation opportunity in Africa. 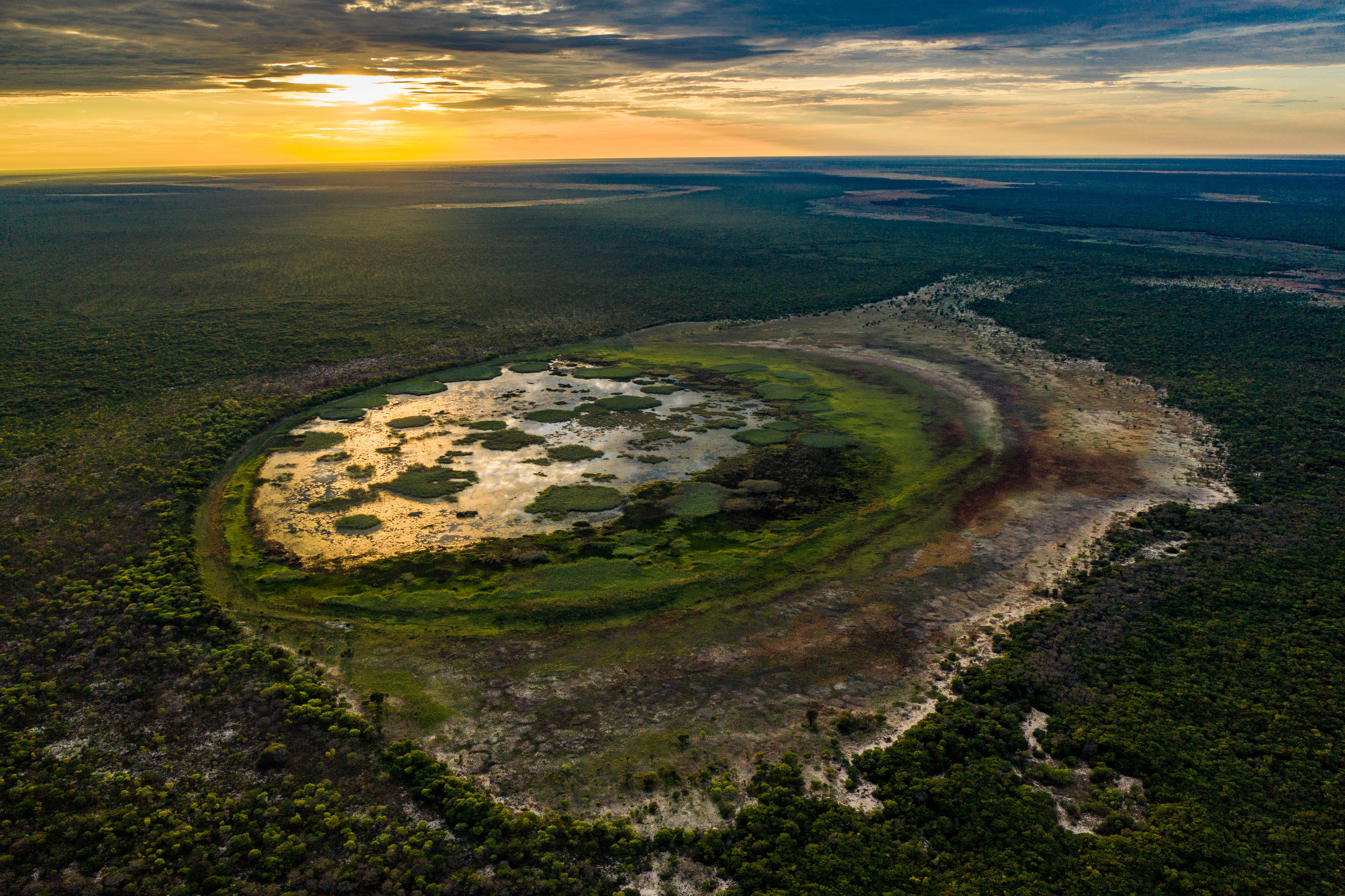 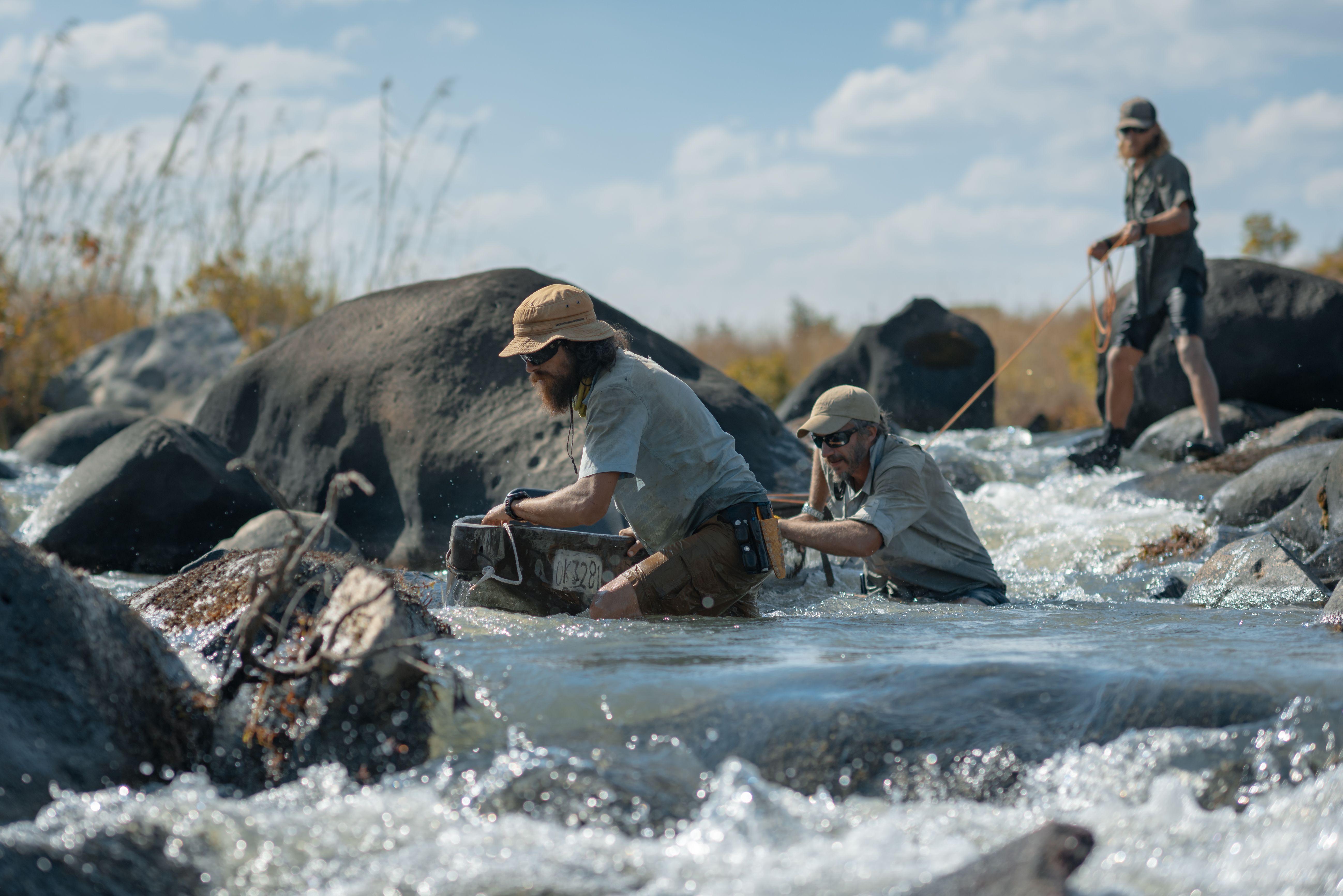 It is our first, and possibly last, chance in the 21st century to contemplate conservation on this scale in Africa, and to approach landscape conservation at the holistic ecosystem level by protecting entire river basins, which will maintain connectivity, preserve ecosystem services across international borders, and support regional biodiversity conservation.

The National Geographic Okavango Wilderness Project team will use their data as the foundation for their work to establish one of the largest transboundary-protected areas in sub-Saharan Africa spanning the three African nations that share the Okavango River Basin: Namibia, Botswana, and Angola.

These forests represent a valuable natural resource that needs to be protected and sustainably developed.

Between this unending network of rivers are vast, intact Miombo woodlands and old-growth forests. About a quarter of Africa’s intact Miombo woodlands are found here and act as the lungs for the region, sequestering tons of carbon each year. These woodlands also serve an important function in regulating the flow and quality of the waters that feed the system downstream. These Brachystegia-dominated forests represent the most important resource for building materials for local communities who use the versatile wood and bark for shelters, fish traps, bee hives, snares, canoes and much more. The forests provide water, fuel, medicinal products and food for local communities.

Aside from their critical role in maintaining the hydrological functions of the system, these woodlands also provide essential natural resources to the communities inhabiting them. 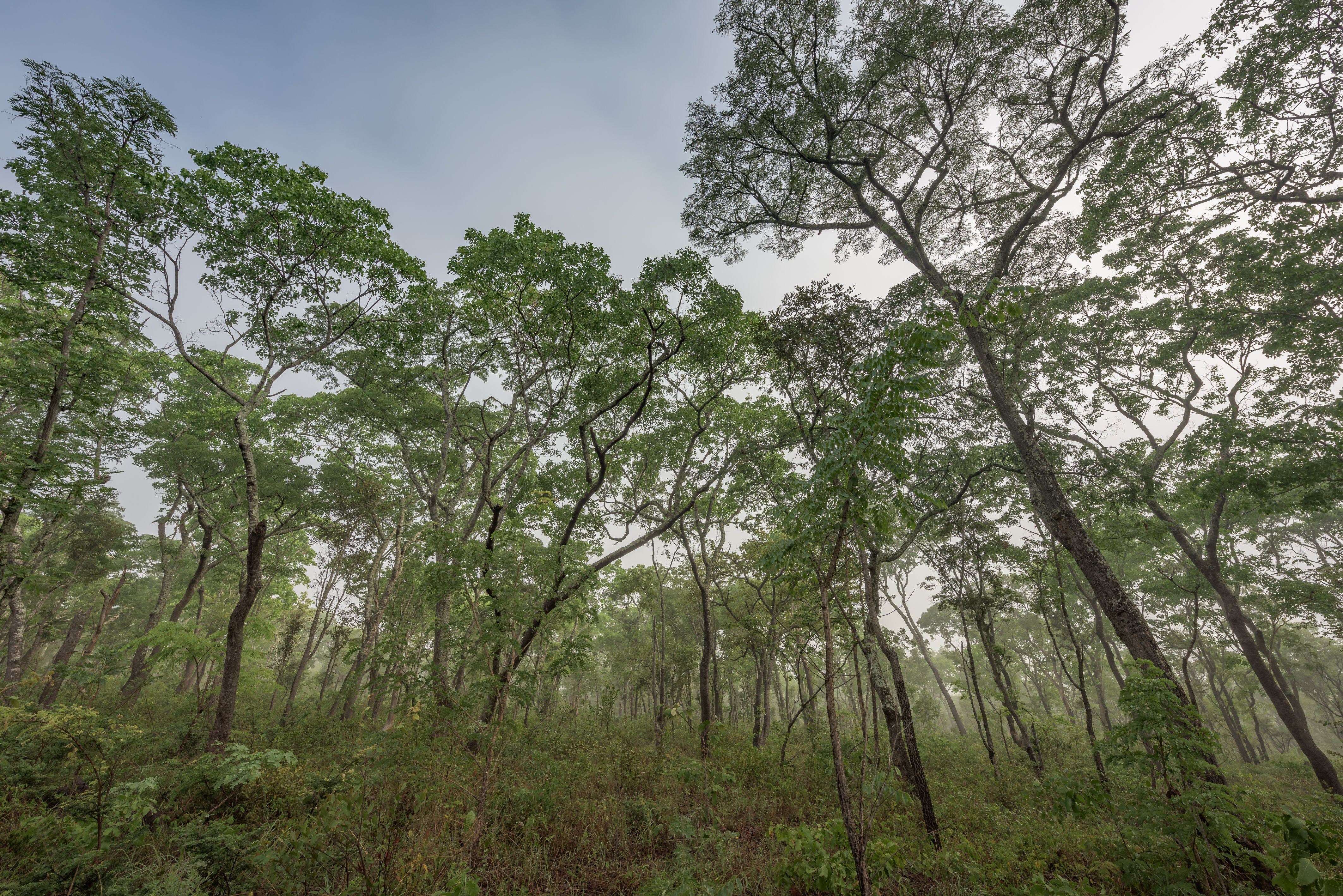 Learn more about our conservation projects that contribute towards saving the Okavango Delta.

Subscribe to our newsletter to recieve exciting news about our projects.